This year’s Midwest CW Faith and Resistance Retreat was sparsely attended by recent years past counts. And as one of the organizers, I could not help feeling some disappointment. But once I put that feeling aside, I was able to appreciate a very special weekend that is best described in one word: sweet. With no more than 35 people attending the retreat, our small numbers allow the scheduled events and programs to be experienced in a very personal and intimate circle which enhanced each experience.

The first thing that enriched the gathering was our great presenters:

Kathy Kelly, of Voices for Creative Non-Violence, former CW from Chicago, friend of the victims of US lead wars of the Middle East: Kathy shared her firsthand stories of Iraqis, Afghans, and Pakistanis, her friends, suffering greatly from our US drone attacks. We also heard from Kathy’s co-worker at Voices, Buddy Bell, who shared with us his recent human rights visit to Honduras.

Daniel Hale was in the US armed forces in Afghanistan and was a specialist involved in armed drone strikes. Daniel told us what it was like for him on a typical day of work at the Joint Special Operations Command in Bagram. It was an eye opener for all of us on what it is like being on the inside of our US drone warfare delivery systems and on how drone warfare is conducted.

Susan Crane came to us from the Redwood CA Catholic Worker. She is a Plowshares activist who’s done 4 Plowshares witnesses and over six years in prison. In her talk “Doing Resistance for the Long Haul” she said keeping hope alive is the most essential element for doing long haul resistance. Susan shared that she found her greatest source of hope in the women she met in prisons, inmates and guards alike. Susan reminded me that peace-making is more than a one demo, one campaign effort, but a lifetime of risk taking and community building, and it doesn’t stop when you’re locked up.

Ellen Grady, from the Ithaca NY Catholic Worker, has been involved with a 4 1/2 year anti-drone campaign at the Hancock Air Force Base drone command site. She’s been arrested four times, served two 15-day sentences, and was one of five people found not guilty in an anti-drone trial last October. Ellen shared how their efforts to resist the drone command site at Hancock Air Force Base was a great help as we in Iowa grapple with starting our own anti-drone campaign.

Jim Haber, former San Francisco Catholic Worker, has spent the last 5 years as Director of the Nevada Desert Experience and shared with us efforts of Catholic Workers in the west to resist drone warfare at the Creech Air Force Base in Las Vegas, NV and Beale Air Force Base near Sacramento. Jim also brought with him and showed the film “Al Helm: Martin Luther King in Palestine” (http://mondoweiss.net/2013/12/martin-luther-palestine.html) which gave Julie Brown an opportunity to share her most recent experience in the West Bank. The weekend just flowed like that…

From a resistance point of view, those gathered collectively served more years of jail time than the number of attendees. Of course, having Father Carl Kabat as our Saturday Mass celebrant, adding Carl’s 17-plus years of prison time, increased the collective years served by our little group… still, over 35 years! This seasoned resistance crowd made the nonviolence training session lead by Eric and Brenna Anglada-Cusens from the New Hope Catholic Worker Farm easy. Brenna said the session practically lead itself.

Often the memorable moments happened at unplanned times, like Sunday night at the Phil Berrigan Catholic Worker House on the first floor in the Peace and Justice Library. We were well into the night and I was pushing myself to stay up to midnight, the time Kathy Kelly and Buddy Bell were to catch a Megabus back to Chicago. The first thing I noticed about those gathered that night at Berrigan House was that half of them were alumni of the Jonah House Community. Mike Miles, Barb Cass, Ellen Grady, Michele Naar-Obed and Susan Crane are all alumni of the Jonah House community in Baltimore, the community Phil Berrigan, our house’s namesake, co-founded. Some of them had not seen each other for years. Then add to the mix Jim Haber, Steve Jacobs, Crissy Kirchhoefer, Julie Brown, Kathy Kelly, Buddy Bell, Elliott Adams and myself. It was a night to remember.

Perhaps the most important thing discussed and the most ironic during the whole weekend was not made public! That is the discussion on the use of toy drones by peace people protesting at US drone sites. This issue was brought into the action planning circle by Steve Jacobs who proposed that the group allow him to fly a toy drone that he and others would buy onto the National Guard base as part of our demonstration. Steve had lined up financial backing of $300 to buy a toy drone at one of the local chain stores. A good deal of the planning action time was spent discussing this. In the end the proposal was set aside. The irony in this is that, of all the peace groups in the US working on anti-drone campaigns, the Catholic Workers with our Luddite instincts one would think would be the least likely to be pushing for toy drone use at peace demonstrations.

Our Catholic Worker Luddite instincts were surely at play when Steve assembled his toy drone on the first floor of Berrigan House for an inside-the-house test flight late Sunday night. Any fears I might had about a “toy drone” quickly disappear when I saw the fragile little thing that Steve had assembled in our Peace and Justice Center. You had to have a smart phone to fly this toy drone. Though there were several people with smart phones in the room, only Ellen Grady was smart enough to know how to use her phone to download the app that allows a person to fly the toy drone. And since the joystick to the drone was now her phone, once the app was downloaded Ellen claimed first rights to fly the thing.

That’s when the high-tech fun began. As soon as the toy drone lifted off the table the whole house went up into a loud roar. In spurts and fits the toy drone went up and down, left and right bumping into the bookshelves, the four walls, furniture and light fixtures, terrorizing the peace and justice books and displayed Catholic Worker newsletters until the toy drone took one too many slams into the ceiling and came down hard and broke. Steve never did get a chance to fly the thing. And as loud as the crowds laughter and screams got, one person’s distinct and unforgettable laugh was heard above all others and that laugh was Ellen Grady’s. It’s the same laugh she had 25 years ago when I first met her. All who know her, know it well. It is a laugh that when fully engaged incorporates the sound of an animal. The laugh has not changed in 25 years. 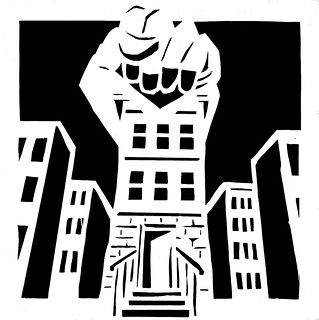 We currently host a weekly Lectionary Bible Study each Monday from 7-8pm, an Alcoholics Anonymous meeting on Fridays at 4pm, and we host the monthly meeting of the Des Moines chapter of Veterans for Peace. We will continue to be open to hosting other related peace and justice events and organizational meetings.

Also at Berrigan House we maintain three peace and justice email listservs. Check them out. If any appeal to you let us know and we will gladly add you to the list:

“Blessed are the peacemakers, for they shall be called children of God.” (Matt. 5:9) Only through nonviolent action can a personalist revolution come about, one in which one evil will not be replaced simply by another. Thus, we oppose the deliberate taking of human life for any reason, and see every oppression as blasphemy. Jesus taught us to take suffering upon ourselves rather than inflict it upon others, and He calls us to fight against violence with the spiritual weapons of prayer, fasting and noncooperation with evil. Refusal to pay taxes for war, to register for conscription, to comply with any unjust legislation; participation in nonviolent strikes and boycotts, protests or vigils; withdrawal of support for dominant systems, corporate funding or usurious practices are all excellent means to establish peace."
- from the Aims and Means of the Catholic Worker