Gambling at Casinos: a Sin for Catholics?

Lots of Novus Ordo parishes plan bus trips for their members to spend one day at casinos in order to raise money for the church and catch fun. This is a sinful practice and I will provide clarifications to back this up. Apart from being a sinful practice, it results in lots of other corrupt habits like lust, gluttony, waste of time and money, lying, cheating, fraud, perjury, theft, drunkenness, and can lead others astray. Aside from this, demons of lust and desire fill up these casinos and cling to those who regularly visit these house of condemnation.

It is stated in the 1914 Catholic Encyclopedia that gambling has been prohibited by the common law in earlier times. The game of luck under the agony of excommunication to both the laity and the clergy was prohibited by two of the oldest (41, 42) among what is termed canons of the Apostles. The 79th canon of the Council of Elders (306) ordered one of the faithfuls found guilty of gambling return back to communion after being on correction for a year. An age-long doctrine (the popular De Aleatoribus") attributed to St Cyprus but credited to various modern scholars, Popes Callistus I, Victor I and Melchiades which is certainly an ancient and intriguing landmark of Christian artifact and an energetic condemnation to gambling. A decree released by the Fourth Lateran Council in 1215 and later introduced into the ìCorpus Jurisî restricted clerics from participating or be available at a game of luck.

Bible scholars usually demand four conditions before it can be considered illegal.

The gambler must own what is staked and must be disposed of freely. It is improper for a lawyer to stake a clientís money or for anybody to stake what is meant for the upkeep of his family.

The gambler must act out his own free will and not compelled unjustly.

The transaction must be without cheating however the normal tricks of the game are allowed. It is illegal to mark the cards but cautiously hiding the number of trump cards one holds is permitted.

Lastly, uniformity must exist between the parties involved to yield a fair contract. It is totally unfair for two professionals to team up against novices of the game and take the money.

There is no fairness between participants in a casino. Their machine has been manipulated to eventually win in the long run. They are professionals and only the participants are in a vulnerable position against the installed odds already programmed into their games and slot machines by the casinos.

It is a blessing to be traditional Catholic with a belief that our money and life are valuable and are to be utilized for Godís kingdom, not squandering it on bets with a desire for quick money that is not worked for especially pointlessly wasting valuable time.

On May 19, Armed Forces Day, members of Veterans for Peace, Des Moines Catholic Worker and Iowa’s religious community held a rally and direct action at the Iowa Air National Guard’s Drone Command Center on the south side of Des Moines.

Elliott Adams, former national president of Veterans for Peace, stressed the fundamental importance of diplomacy, rather than violence, in resolving international conflicts.

Reverend Bob Cook, Presbyterian, Reverend Chet Guinn, Methodist, and Srs. Elaine and Jeannie Hagedorn, Catholic Sisters of Humility, spoke from their religious perspective about the immorality and injustice of the drone warfare conducted at the base, noting that these actions of the U.S. government terrorize families and communities in the Middle East while decreasing the safety of Americans by fanning the flames of terrorism against the United States.

Frank Cordaro, co-founder of the Des Moines Catholic Worker, called on Bishop Pates to follow through on the US Catholic Bishops 2014 statement on US drone warfare, which decried the immorality and injustice of the “War on Terror” and found that US drone warfare fails the criteria of the Catholic teachings on “Just War.” This statement was signed by Bishop Pates as head of the US Catholic Bishops International Justice and Peace Committee in 2014. Today, in 2018, US Drone warfare has grown “exponentially” again. Cordaro not only challenged Bishop Pates to speak out, he also called on all priests, pastors and members of religious orders to speak out too.

At the conclusion of the rally, Frank Cordaro and Elliot Adams peacefully crossed the line onto the base in an act of civil disobedience and were arrested. Both spent the night in jail, plead guilty to trespass at jail court, and were fined and released the following day.

The next action in this campaign will be the second annual August 6-9 vigil at St. Ambrose Cathedral, begging the Bishop to join the effort against the Des Moines Drone Command Center, in accordance with the US Bishops’ 2014 statement finding US drone warfare to be immoral and unjust. August 6-9 commemorates the US nuclear bombings of Hiroshima and Nagasaki, Japan.

Prior to the August vigil, the campaign plans to sustain a continued presence at the Drone Command Center. The campaign is also planning another retreat and action on December 28, the Feast of the Holy Innocents. You can read Jess and Ruby’s full statement here. “Two Iowa activists with a history of arrests for political dissent are claiming responsibility for repeatedly damaging the Dakota Access Pipeline while the four-state, $3.8 billion project was under construction in Iowa.

Jessica Reznicek, 35, and Ruby Montoya, 27, both of Des Moines, held a news conference Monday outside the Iowa Utilities Board’s offices at the Iowa Capitol complex. They were taken into custody by state troopers immediately afterward when they abruptly began using hand tools to damage a state-owned sign outside the board’s offices.

Both women are involved in Iowa’s Catholic Worker social justice movement and described their sabotage as a “direct action” campaign that began on Election Day, Nov. 8, 2016.”

Aug. 2015 Statement by the Des Moines Catholic Worker in Support of Women’s Ordination and Open Communion

For several years, the celebration of Catholic Mass at the Des Moines Catholic Worker has been a point of controversy with Bishop Pates and others representing the hierarchy of the Roman Catholic Diocese of Des Moines.

Most recently, in May of this year, Bishop Pates wrote us a letter stating that the “privilege” of having Mass at the Des Moines Catholic Worker has been “revoked.” The reason for this is that, in December 2014, Reverend Janice Sevre-Duszynska, who is a woman priest, celebrated a Roman Catholic Mass at the Des Moines Catholic Worker. It is the official position of the Roman Catholic Church that women may not be priests.

In 2010, Bishop Pates also expressed concerns about the celebration of Mass at the Des Moines Catholic Worker, chief among these being that we invite everyone, including non-Catholics, to receive communion.

In response to the Bishop, we wish to let it be known that the Des Moines Catholic Worker affirms the equality of all people, regardless of gender, to be full members and disciples in any Church claiming to follow Jesus; in the Roman Catholic Church this includes the priesthood and other positions of leadership within the Church. Likewise, we affirm that the Sacrament of Holy Communion should be open to all who wish to participate, regardless of religious and
institutional affiliations. No one seeking reconciliation and love should be denied the Eucharist. We believe that Jesus would not have it otherwise.

We welcome dialogue about these issues. For those who may be interested, we have included below links to the letters we received from Bishop Pates in 2010 and 2015, and the 2010 letter from a Catholic Worker intern that initiated our dialogue with the Bishop about our celebration of Mass at the Des Moines Catholic Worker.

May 5, 2015 letter from Bishop Pates to the Des Moines Catholic Worker

We also invite you to investigate the following links relevant to the
movement supporting women’s ordination in the Roman Catholic Church. 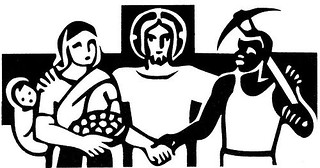 We open the Bishop Dingman House - 1310 7th St. - five days a week and welcome others as guests in our home.

Besides the meals served:

Free Food Store: For more than 20 years the Des Moines Catholic Worker has been doing a produce giveaway. We give away donated produce on Saturday at 10am at Trinity United Methodist church at 8th and College.

Alcoholics Anonymous meets every Friday at 4pm at the Phil Berrigan House, located at 713 Indiana.

The Des Moines Catholic Worker community, founded in 1976, is a response to the Gospel call to compassionate action as summarized by the Sermon on the Mount. In the spirit of the Catholic Worker tradition, we are committed to a simple, nonviolent lifestyle as we live and work among the poor. We directly serve others by opening our home for those in need of food, clothing, bedding, a shower, or a cup of coffee and conversation. We also engage in activities that foster social justice.

The Catholic Worker movement was founded in 1933 by Peter Maurin and Dorothy Day in New York City to implement the teachings of the Gospels and to promote the biblical promise of mercy, compassion, justice and love. Grounded in the firm belief in the God-given dignity of every person, the movement is committed to nonviolence, voluntary poverty, and the Works of Mercy as a way of life. The movement has spread far and wide; over 150 Catholic Worker communities, from Idaho to Australia, serve those in need in their neighborhoods.